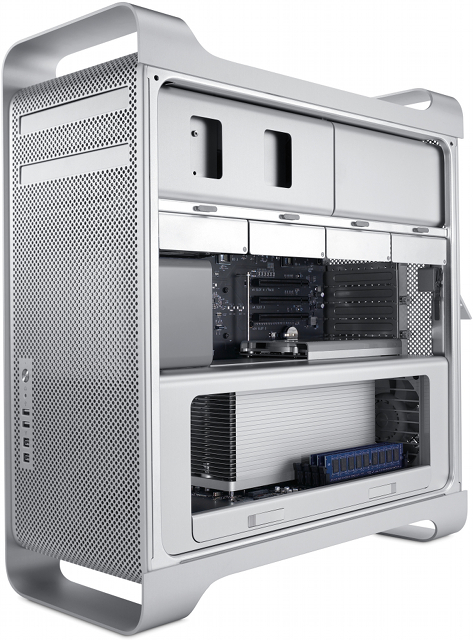 (contenu en anglais)
Afficher la traduction automatique
Afficher l'avis original
The Mac Pro is Apple’s professional workhorse. This computer is featured in many top facilities of the recording industry, and it has been the flagship of Apple for quite awhile. There are many different versions of the Mac Pro since they dropped the Powermacs, but the one I’ll be talking about has two 2.4 GHz Quad-Core Intel Xeon Westmere processors, 6 GB of RAM, 1 TB hard drive, a Radeon HD 5770 with 1 GB of RAM and a Superdrive.

The Mac Pro is not necessarily the prettiest to look at, and it’s actually getting a bit dated considering Apple mostly focuses on looks for most of their lower level machines. However, the Mac Pro is a purely professional machine, and looks are second to hardware. The hardware in this thing is all server/industrial grade stuff. You have the Xeon Westmere processors, which are renowned for their stability under heavy load and FB-DIMM RAM with extra thick heat sinks to help prevent any heat soak that may occur when pushing this thing to its limits.

Most people complain about the price of this machine, and given that it’s about $3500, their complaints are a bit justified. However, you can’t forget that this is top of the line industrial hardware. It’s true that Apple charges more than most people, but once you start factoring in the hardware, it’s not as big of a difference as most people thing.

The computer comes standard with OS X 10.6 Snow Leopard. This is an upgraded version of the 10.5 Leopard, and it has upgraded 64-bit compatibility to allow usage of both quad-core processors. I’ve found 10.6 to be more stable than 10.5, and it’s way better when it comes to things like Wi-Fi. The best thing about the OS is that you don’t have to worry about getting a pesky virus like so many other OSes out there.