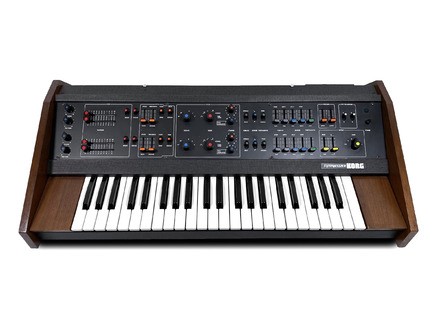 Voir les autres avis sur ce produit :
Afficher la traduction automatique
Afficher l'avis original
This is an old-school analog synth, made by Korg. This synth is duophonic. It's got 2 analog oscillators, VCF filters, and a ring modulator. It has 3 1/2 octaves. It can be set up to play monophonically with two seperate oscillators or duophonically. Thus it has double of all the controls, so that it can be played with both voices. Basically, this comes down to playing single-note melodic lines, and given that limitation, it's got some really great sounds.

Messing with the different parameters on this synthesizer is somewhat difficult to figure out at first, at least for me. But it really just comes down to messing around with the different sounds. It takes time to figure out, as most synths do. But in time it can be really useful. There's a lot of really awesome sounding tones you can get out of it. The setup isn't too difficult. When recording with it I usually go directly into the pre-amp, as it's generally easier. I haven't seen a manual for this so I can't vouch for its quality.

I like the sounds of this synth a lot. As it's an old analog synth, I don't really dwell too much on how "realistic" the sounds are, because they aren't really that close to real instruments. A good synth, in my mind, should sound like a synth, and not an imitation of something else. Therefore, I find this synth to be exceptional. It's great for synth bass lines, as it has fat, warm bassy sounds that can be a nice alternative to a bass guitar. It also has great high-pitched, singing tones, great for melodic lines like those used in the Cars and other New Wave stuff from that era. It's got reasonable touch sensitivity and aftertouch. Definitely responsive to dynamics. I think the oscillators and modulators give it some really awesome sounds.

I like the sound of this synth the best. It can be frustrating that it only has two voices, and most often I'll use it monophonically, but I do think it has a nice sound. I'd say overall it's probably going to run you a pretty penny, but unless you have some AMAZING analog synth simulator that I am not aware of, I don't think you'll be able to find much that sounds like this much cheaper. I've played a few synths that are like this, and while this one isn't as nice as some of those were, it's still got a lot going on. I definitely recommend this if you can find it.
Ceci est un synthé old-school analogique, faite par Korg. Ce synthé est duophonique. Il possède deux oscillateurs analogiques, filtres VCF, et un modulateur en anneau. Il a 3 1 / 2 octaves. Il peut être mis en place pour jouer avec deux oscillateurs monophoniquement séparés ou duophonically. Ainsi, il a le double de tous les contrôles, de sorte qu'il peut être joué avec deux voix. Fondamentalement, cela revient à jouer une seule note des lignes mélodiques, et étant donné que cette limitation, il a quelques sons vraiment génial.