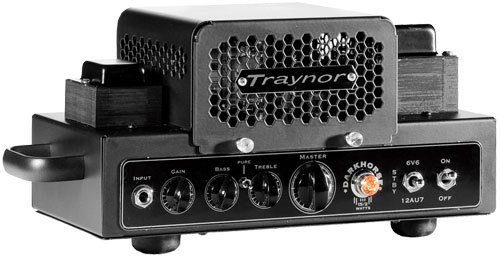 (contenu en anglais)
Afficher la traduction automatique
Afficher l'avis original
As the world of "lunchbox" amps begins to get dangerously overcrowded, it's becoming harder to justify not owning at least one of them. A few years ago, amps like these were hard to find. Now they're everywhere and every manufacturer has one. Traynor's darkhorse lives up to its name though by looking different right out of the box. Seriously, you can see the transformers! That's something new. The internals are no surprises. 6V6 tubes. 15 watts. It has three tonestack settings: USA, brit, and pure. The pure is basically a bypass. I elected not to get the extension cab. Although I am used it in with a matchless 212 with greenbacks so i can't be too far off.

There's really not that much to the Darkhorse. It doesn't even have a gain knob. Just pure master volume amp tones. I will say though, for a tiny little thing this is built about as tough as any lunchbox amp I have played. The design gives you that vibe as well, that this is an amp that was designed with a military spec or something.

The USA setting has kind of an overdriven fender tweed thing going on. But when you push it, there's some heavy overdrive to be had. Kind of Sounds like a Mesa Mark I in a way. Impressive. The Pure channel is really really loud, and is also probably the gainiest. It sounds best for strumming rock stuff and not much else. But still a sick channel. The brit channel is probably the most aggressive sounding. You can get a lot of gain out of it with some tweaking, probably even more than the Pure channel. It doesn't sound quite traditional enough for me though. I wish it sounded more marshally. Don't expect any super high gain out of this thing. It can get into led zeppelin territory. That's about it.