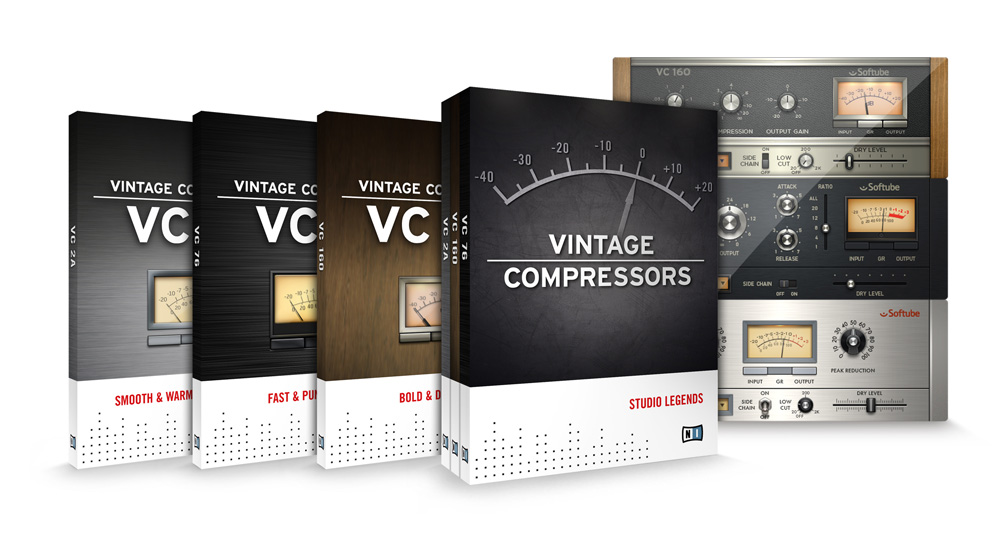 (contenu en anglais)
Afficher la traduction automatique
Afficher l'avis original
Native Instruments Vintage Compressors is a suite of effects processors to be used in Guitar Rig 5 or as stand-alone plug-ins in a DAW. I received these plug-ins when I purchased Komplete 8 Ultimate. Therefore, installation was completed as part of the entire K8U install process. This software package can be purchased separate from K8U, and downloaded directly from the NI website for installation. Authorization is completed using the NI Service Center software application.
The compressors in this bundle are supposed to model some famous hardware compressors - 1176, LA-2A, and DBX-160. If you have any idea about how to use the controls on the hardware, then using this software emulations will be pretty straight-forward. However, if you are more familiar with digital compressors than hardware compressors, the controls are a little different. In these models, the compressor threshold is controlled by using the 'input' volume rather than having a separate threshold control. Depending on the compressor, the 'attack', 'release', and 'ratio' are all a little different.
I actually wish Native Instruments would have included more presets for specific instruments to give me a better starting point. The Waves CLA compressors includes much better presets to use, if you aren't very familiar with using compressors.

These compressors were a collaboration between Native Instruments and Softube. I can only assume that Softube performed most of the modeling and NI took over the rest. Softube has their own versions of these compressors available (minus the 160). I don't own any of them so I can't compare the sound. My impression is that the Softube versions modeled more individual components of the hardware compressors and that the NI versions modeled the processors at a higher level.
A great thing about these compressors (as well as the Softube ones) are there parallel compression options. Parallel compression is a popular technique where an uncompressed version of the signal is mixed with the compressed version. Typically this means that you have to have use two tracks to achieve this - one with a compressor, one without. These compressors allow you to achieve this on a single track. One thing to watch is whether the you are 'mixing' between the dry and wet signals (30% dry, 70% wet) or if you are just adding extra dry signal to the 100% wet signal. The GR5 and stand-alone versions of these plug-ins do this differently. Just something to watch out for.