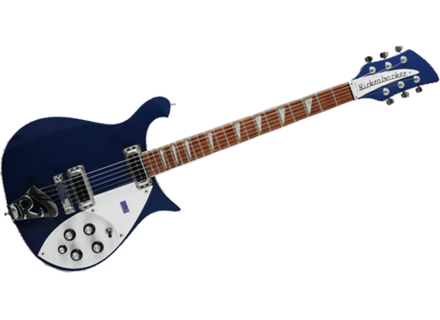 Acheter ce produit neufVoir tous les prix >
Voir les autres avis sur ce produit :
Afficher la traduction automatique
Afficher l'avis original
The Rickenbacker 620 is a really unique and cool guitar that offers a distinct and different voice from the typical Gibson, Fender or Ibanez guitars that are commonplace nowadays. Rickenbacker guitars were noted in the sixties for their futuristic look, their very unique feel and the killer jangly sound as used by many British Invasion groups of that era. It features all maple construction, a rosewood fretboard with 21 frets, Schaller tuners, Rickenbacker Hi Gain pickups, and a dual volume, dual tone control layout with an added gain/contour control knob. The guitar also has a finished/lacquered fretboard which is not something often seen on guitars. It's made in Rickenbacker's factory in the USA.

The guitar is not the most ergonmoic instrument in the world considering its smaller size. The all maple construction makes for a heavier feeling instrument and the design is certainly not one that's suited to fast playing due to the cumbersome neck heel. However it does feature a nice neck profile for chord and lower position lead work which is a plus. The upper fret access isn't great due to the clunky neck heel, but that's not really what the guitar was designed to do anyhow.

Getting a good sound out of this guitar is a bit harder than normal because of the somewhat confusing control layout with the tone controls on the top row and both volume controls on the bottom row. However, when it is finally dialed in it sounds utterly glorious.

I've tried this guitar through a vintage Fender Super Reverb with a Diamond Compressor out front and the tones were sheer perfection. Hitting even just open chords resulted in this brilliantly complex and jangly clean tone that just gave me absolute shivers the first time I heard it. These guitars just have a beautifully intricate voicing that is everything I love in a clean sounding guitar and nothing I don't. The neck pickup has just the right amount of girth and sustain for that edgy, subtle breakup that is too cool for words. The middle position is jangle city, and the bridge pickup is just a vehicle for the most killer sixties style clean tones you could ever want. Definitely just an amazing sounding piece.