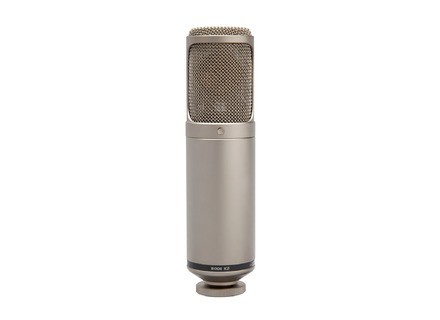 Acheter ce produit neufVoir tous les prix >
Voir les autres avis sur ce produit :
Afficher la traduction automatique
Afficher l'avis original
The Rode K2 is a Large Diaphragm vacuum tube condenser microphone with a very low self noise and a good wide dynamic range. The K2 has a very classic sound to it once you start changing the tubes you will see how much better this microphone can get than what it already is. The Rode K2 is very good for vocals and a few different instruments. I have heard it on acoustic guitar and on piano and it sounds great with both of those instruments. The K2 is built very tough and can take some abuse without it causing any problems. One of the things that I disliked about the Rode K2 is some times the mids and low mids get a little over powering. You might not notice it at first but when you go to do your final touches on the mix you will hear how bad it can get. I had to do some pulling back on those lower mid frequencies and boost some high end frequencies from time to time. This could just be on my voice , I am not sure because I have not recorded anyone else with this microphone to compare too.

This microphone cost 700 dollars and can compete with microphones in the 1000 dollar range easily. I have been using this microphone since 2010 and stop using it in 2011 due to getting some near gear for my home studio. It has an shock mount built in that has great vibration resistance. The K2 has a good finish on it and doesn’t scratch easy and it will look great in your studio. I have used many of Rode’s microphones and the K2 is one of the better ones they make, it is priced fairly and competitively. It will last you a long time if you take care of it. It doesn’t matter what kind of music you make or even what instrument you are playing and recording, the Rode K2 will take care of it.