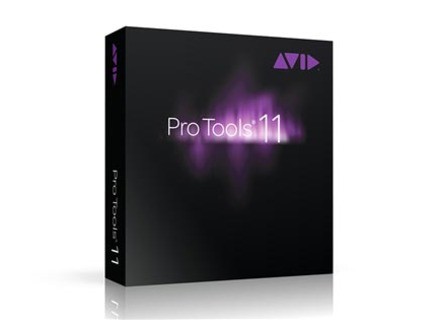 Voir les autres avis sur ce produit :
Afficher la traduction automatique
Afficher l'avis original
I got Pro Tools 11 for free because I bought 10 when I was a student at LA Recording School. This was pretty sweet. I had it installed on my 2012 MacBook Pro with 4GB of Ram, and on the 5400 RPM 500 GB internal hard drive. I had no problems with the setup and it was in fact really fast. Now, this version does not upgrade or uninstall your previous Pro Tools version. I have 10 and 11 and they both have their independent icons and folders.

I had no issues installing or running it for the first time. I had my laptop optimized to run with Pro Tools 10 according to Avid suggestions, but I also installed 11 on another computer that hadn’t been optimized, and it presented no problems during or after setup.

The difference performance-wise between 10 and 11 is staggering. 11 uses the full capabilities of your computer. It loads fast, runs the sessions and virtual instruments like nothing. On 10 for instance, as soon as I record-enable a track, the fans of the computer would start revving up. This does not happen on 11. Not even during the recording of multiple tracks.

Of course, being 64-bit can far utilize better the resources of your computer than 10 could ever have.

Pro Tools 11 is the next logical step for Avid and for users. The new format of plugins is still troublesome for some because not every developer supports the new AAX64 format. The new metering options are terrific and the faders look cool too! I have the UAD plugins and the run perfect on this new version of Pro Tools. I would even dare to say that they sound better. Avid claims that this is true because of their new Audio Engine. I kinda believe them to some extent.