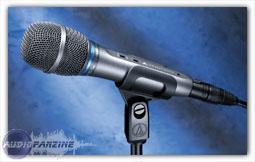 (contenu en anglais)
Afficher la traduction automatique
Afficher l'avis original
*Microphones are very subjective. Some microphones that work for some brilliantly may be disastrous on others. It is therefore important to understand the context in which this review is written and take it with a grain of salt, like all reviews on microphones should be treated.*

The Audio-Technica AE5400 is a handheld condenser microphone tailored specifically for live use. Its claim to fame lies in its element: the very same as the vaunted AT4050. It's essentially a narrower cardioid AT4050 for live use. You may be wondering how I can say something this lofty. Live microphones are by their very nature less detailed than studio microphones, but more forgiving. I'm not one to judge a microphone based solely on specs; one has to try it first. However, let's look at a few of the specifications of the AE5400 compared to the AT4050's:

What's going on here? Well, having used both, they're utterly different microphones. Don't fool yourself by thinking the AE5400 is better than the AT4050 "except for multiple patterns." The AE5400 is a remarkable live microphone and it IS incredibly possibly to get incredible studio vocals out of them, but it's not going to replace the AT4050. The AE5400 has a nice coloring to it that, if you look at the frequency curve, is designed to reduce sibilance, and emphasize presence and warmth.

Personally, I prefer the AE3300. This microphone, for me at least, is very good live, but it comes across as just another premium live microphone to me. Unlike the AE3300, which seems to have enough "anger" in its sound for me to absolutely love, the AE5400 is sadly, a little bit dull-sounding, especially when compared to the venerated Neumann KMS 105 it's supposed to compete with. However, its switches and features make it a heck more versatile, so don't toss the idea of the AE5400 before you give it a go yourself!
Microphones * sont très subjectives. Certains micros qui fonctionnent pour certains avec brio peuvent être désastreuses sur les autres. Il est donc important de comprendre le contexte dans lequel cet examen est écrit et le prendre avec un grain de sel, comme tous les avis sur les micros doivent être traités .*